The Republic of Panama is located in Central America with a population of over 3.4 million habitants, its capital city of Panama.
Its official currency is the balboa and its official language is the Spanish 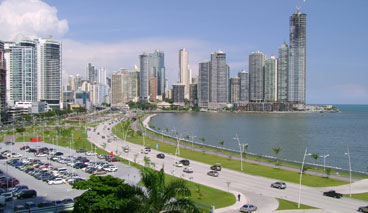 Panama is an international center for transportation, a vibrant financial center and a shopping center for Latin America and the Caribbean, especially in the Colon Free Zone.

Panama City is a sophisticated metropolis and the country is a land of virgin islands, forests and mountains with a unique tourist attraction.

Panama has a tropical climate, very hot all year round on the coasts and lowlands, this being a country with very high biodiversity, it offers such diverse landscapes as well as their own people, offers the beauty of its beaches with their spas so unique Trankil and the softness of the sand .

Its territory is located in the Panama Canal which facilitates communication between the shores of the Atlantic Ocean and Pacific Ocean.

The country also includes the Colon Free Zone which is the largest free zone in the western hemisphere and the second largest in the world.

Panama is in force by an open system to the free economy, and their main standard is the exports.